Hiring Disruptors in the Age of Disruption Part 2: Spotting a Diamond in the Rough 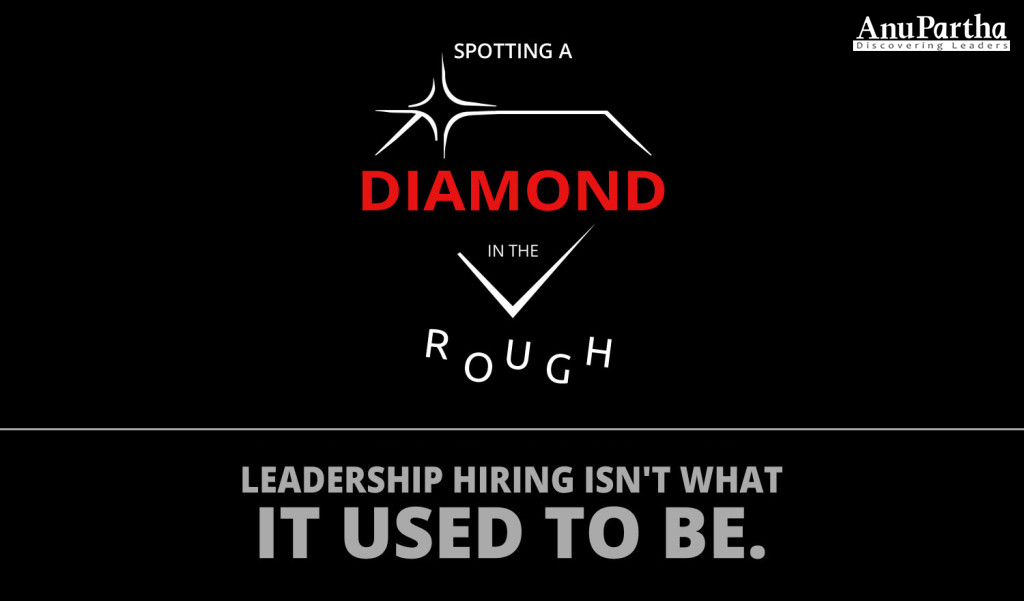 The first part of this blog series – Hiring Disruptors in the Age of Disruption – deals with the issue of how advances in technology have forced companies to reinvent themselves and change their leadership strategy. This post discusses our view on identifying a transformational leader.

Take a moment to think about someone you consider to be a great, inspiring leader. What is it about them? We all know a transformational leader when we see one and yet, pinpointing exactly what it is that is different about them often proves to be elusive. They might not jump right out at you, but make no mistake, they definitely stand out.

We feel a more pronounced need to be guided by these leaders, today more than ever before, because we live in such rapidly changing times. Technology and social breakthroughs ensure that we are constantly in the midst of unprecedented changes, so much so, that it is something that most of us have internalized and accepted. Companies too are under ongoing pressure to maintain a state that constantly requires decisive action, innovative ideas and near flawless execution. This tremendously impacts hiring at the senior leadership level. Surely, one cannot be in the middle of a swirling vortex and expect to just coast along. We need to rethink the kind of people we need, who would help us pull through these radically changing times and come out on top. Who are these leaders and how and where do we find them?

How Do We Identify Transformational Leaders in Ever-changing Times?

My experience tells me that there is no “one size fits all” model, if ever there was one. By definition these individuals are unconventional and independent-minded, and so, hard to label into neat categories. I have seen ‘micro managers’ with zero delegation capability do very well, and quintessential ‘macro managers’ who are happiest when they don’t have to get involved in day-to-day operations. Then, there are also those who have stayed in one company for a number of years, but if you dig deeper you find that they have been anything but conventional in how they have transformed their business. Every company is different and every situation is unique, but in my years of hiring transformational leaders, I have found that there are some qualities that set them apart, enabling them to be adaptable in most situations.

Have you noticed that one person who has the urge to stick his neck out, voice his opinion and jump into prove it? He is the one who is willing to work the nights, alone if there is nobody to help, with/without resources, but do it he has to. Remember the friend who decided to quit when he was all but assured of the CEO’s job because he wanted to ‘do something different?’ He’s most likely a change leader in the making. Seeking risk and putting themselves in very uncomfortable situations comes naturally to them. This inherent appetite for risk is a common trait I have noticed in most such individuals. It is almost as if a ‘difficult to pull off’ task is bait for them and they cannot resist making a grab for it.

It is vital to understand what motivates them to do so. They are not attention-seeking by nature. I think it is one characteristic that most leadership gurus forget to mention. Truly transformational leaders hate attention on themselves. It is more the challenge and the opportunity that they have to raise themselves several notches that drives them. Fame seems a somewhat unnecessary diversion.

Ability to See past Today and Tomorrow

I have always noticed a restlessness and a sense of urgency that is palpable in those I believe are transformational leaders. It is not that they aren’t calm or patient; but they invariably have a sense of being propelled by a tomorrow that is so clear and inevitable in their minds eye, that the future can’t come fast enough! They are not content with the status quo. They have a track record of hacking their industry, their product, their vertical – putting every industry assumption or sacred cow on the chopping block – and being willing to sacrifice everything.

Here again, I must make a distinction between dreamers, with a fertile imagination, and forward thinkers, who take what they know and project it into the future. They dream big, but back it up with facts and concrete steps about how to get there. They are able to clearly articulate what seems futuristic to the rest of us. And it need not be in technology alone. It could be about society, or the arts. Of all the characteristics of great leaders, I believe this ‘visionary’ quality is unequivocally the one that is impossible to learn. Either you have it or you don’t.

Ability to Be Decisive

A logical extension of the first two qualities leads us to the third – decisiveness. Transformational leaders make very quick decisions. They are instinctive and are driven more by present value than by their judgement of the potential value. A lot of times, the reasons they would do something will be because they see it as a future reality. Too much thinking or analysis will not change it.

Have you noticed how a self-made billionaire, like Mark Zuckerberg for example, seems to have learnt every management technique in the book without even completing his undergraduate degree? It is apparent that he has got to his current position by how much he has ‘learnt’ about technology, finance, people management and life in general in the time that most men his age are still trying to figure what they would like to do with their life. That says a lot about the type of transformational leadership he embodies.

Such a trait is a huge pointer to the types of leaders we are looking for. Granted, not every leader becomes a Mark Zuckerberg tomorrow, but a good contender is one who has the ability to learn fast and absorb the fundamentals from the environment. It must not be confused with IQ or even someone who seems to have a passive repository of knowledge stored in the brain. They are not mutually exclusive. It is a more dynamic intelligence, where curiosity is a driving force and connections are made first-hand.

When we see such individuals and their career path, we often question the co-relation between the level of education and success. These individuals trick us into believing that perhaps education is not the key to learning or success. This could not be further from the truth. Not everyone who foregoes a formal education is successful. This quality is hard to develop and has to be inborn. It can be honed with time but the basic ability must exist.

Need to Be Independent

Independence ranks very high in personality traits for these leaders. And these traits are visible early. That fresher who wants to do it his way and does not want to be told? That kid who says, ‘Leave me alone; I will get the job done?’ Early signs! It is not as if they simply want to be defiant or do not want to get along. Rather, it is more because they are very self-assured and certain that they will figure out the best way to achieve their objective. They feel shackled if they are told the end goal and the path to follow is clearly pointed out. They would rather chart the course themselves.

These individuals are mavericks, and I am very careful to use this word because it is often misinterpreted in our pop culture to mean rebellious or eccentric. They are unorthodox or independent-minded people who will question every status quo and then choose whether or not they want to behave in a certain way. Sometimes, as a result of this questioning spirit, they do end up following convention, so on the surface, they may not come across as the outliers that we visualise them to be. That can make it hard to spot them, but they are mavericks in their own right.

Desire to Be Modest about Themselves

This last trait that makes our job challenging but also very satisfying. It is hard to spot transformational leaders because they don’t see themselves as special. We must make the distinction clearly here: they do have a healthy self-respect and they definitely feel good about themselves for pulling off what others didn’t think was possible, but they don’t define themselves by their accomplishments. Think Jose Mujica, former President of Uruguay who is often described as “the world’s most humble president.” Under his administration, the percentage of Uruguayans who lived below the poverty line fell from 39% to 15%. Such individuals simply feel drawn by a goal that is greater than themselves They are just being who they are. They can’t be otherwise and they know it.

If transformational leaders are a breed by themselves and notoriously difficult to pin-point, how do we identify them? There are a few ‘give aways’ that I have consistently noticed among such leaders.

They are not motivated by money or designation. I have often seen that transformational leaders will and can be tempted to take up a job with much less pay and perks because they can’t resist it. They have big egos, but their ego will be around the level of responsibility, the complexity of the task and the empowerment in the role, not the designation. A true transformational leader is one who just cannot resist taking up something that looks tough, that hasn’t been done before. It could be social innovation of the kind Mohammed Yunus achieved or it could be technological innovation like Elon Musk is known for. These persons value the people they work with the most. This is crucial for them because they want to learn and that cannot happen without having the right people above, below and around.

In essence, it would seem that transformational leaders are forged with a different metal. Without doubt, they do also embody the traits typical of leaders: they are entrepreneurial and passionate, they thrive in chaos and they can think out-of-the box, they know how to motivate their team to achieve that goal. They have lived and worked in different continents and countries. They are people who have worked in start-ups as well as large companies. Yet they are also the ones who, despite having taken risks and succeeded, or having failed and picked themselves up again, instantly strike you as those who positively, unflinchingly, believe in the inevitability of their success.

This is the second blog post in our series – Hiring Disruptors in the Age of Disruption. Our last post will focus on the unique hiring approaches required in today’s fast-paced environment drawing on our personal experiences. Stay tuned!